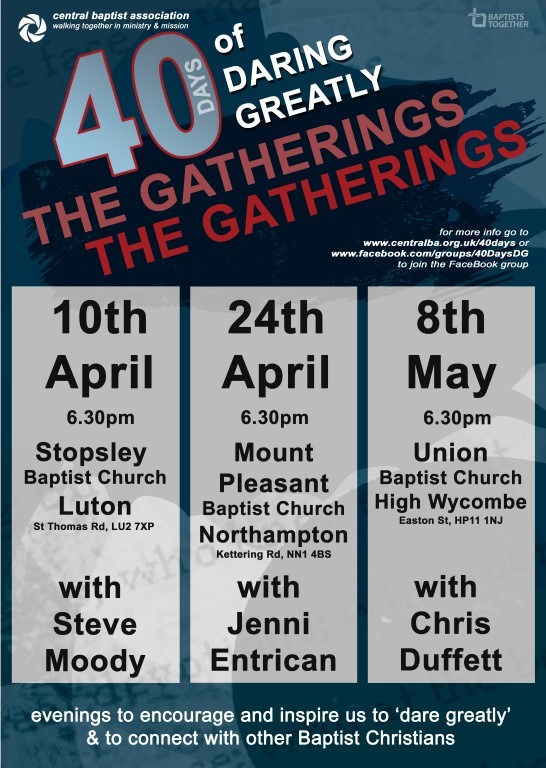 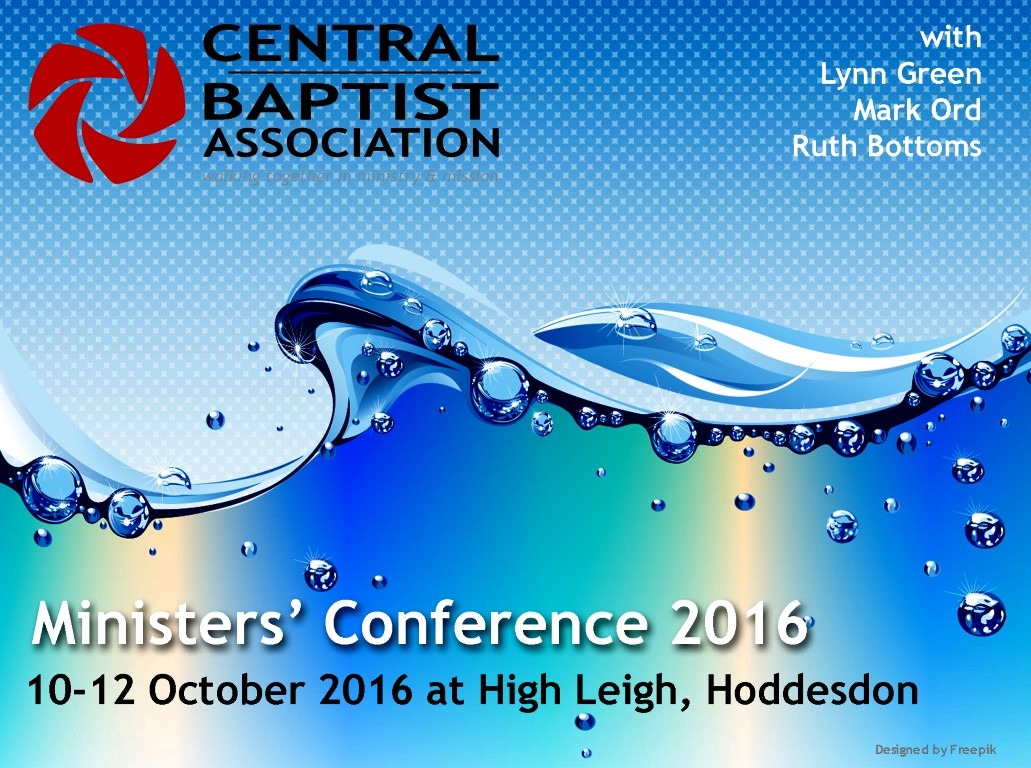 MINISTRIES TEAM LEADER: The Revd Andy Hughes has been appointed as the Team Leader of the Ministries Team at the Baptist Union of Great Britain.

ECUMENICAL OFFICER: Stuart Jenkins, who is a chaplain at St Andrew’s Hospital in Northampton has been appointed part-time Ecumenical Officer for Northamptonshire (Shire & Soke)

GRANT APPLICATIONS: The next deadline for grant or loan applications from Central Baptist Association is March 11th, 2016.

HOME MISSION GIVING: Many thanks for your continued support for Home Mission. In January 2016 Central Baptist Association churches donated £18.887, marginally less than the equivalent month in 2015.

REGIONAL MINISTRY OPPORTUNITY IN HEBA: In the light of Barrie Smith’s ongoing medical treatment he has decided to retire from the role of Regional Minister in HEBA on his 65th birthday this summer. In the meantime, the trustees have taken steps towards the appointment of a successor as Regional Minister for south Birmingham, Coventry & Warwickshire. An advert, role description, and an application form are on our website here http://www.baptist-heartofengland.org/index.php/recruitment and the closing date for applications is Friday 1st April 2016.

40 Days of Daring Greatly GATHERINGS events in different parts of the association. This is a rare opportunity for our congregations to meet & share together in a hopefully encouraging and inspiring events – see poster for details.

WOMEN IN LEADERSHIP retreat day with Jenni Entrican April 25th – please note this is NOT just for ministers – it is for any women in leadership (or thinking about it).

BAPTIST ASSEMBLY at Oxford on Saturday May 14th. See www.baptist.org.uk for further details.

BELIEF SPRING COURSE 2016. The link below gives details of a series of sessions on “Science & Belief” being run in Bedford by BELIEF, an ecumenical training programme. https://drive.google.com/file/d/0B19iZajJSOVfRmMyTFJWRHdjRVE/view?usp=sharing

FROM THE BAPTIST UNION of GREAT BRITAIN
Refugee Response – sharing, listening, praying
In response to growing concerns and responses to the largest human migration since the Second World War, Baptists are invited to come together for a day of listening, learning and praying together. An open invitation is extended to anyone who is involved in responding to the refugee crisis, offering welcome and support within your local community, or simply those who are concerned to know and learn more about how we can respond as a Gospel people. The day will consist of a mix of short presentations, workshops and opportunities to share and listen to on-the-ground experience. Venue: Queens Road Baptist Church Coventry CV1 3EG. Time: 10:30 – 16:00. Cost: £5.00 with lunch provided.
Participants include: Juliet Kilpin (Urban Expression) ; Wale Hudson-Roberts (Justice Co-ordinator – Baptists Together); Simon Jones (Bromley Baptist Church); Tony Peck (European Baptist Federation); Mary Taylor (Yorkshire Baptist Association).
www.baptist.org.uk/refugeeresponse for more information and to book place(s). Closing date for bookings: 30 March 2016

INS & OUTS IN MINISTRY SINCE THE 2015 CBA DIRECTORY:
Ron Goddard has retired to Corby
Sam Edwards to North Herts NHS Trust
Ruth Gookey has been called to Harefield (July 2016)
Mark Jones to retirement in Northampton
David Lewis from Hutton & Shenfield to Christ Church, Stantonbury, Milton Keynes
Heather McIntyre to Speen
Alan Mair has retired to Desborough
Jane Robson has been called to the pastorate of Tilehouse Street, Hitchin and the induction is April 16th
John Matthews has retired to Rushden
Andrew Muchunga has been appointed lay pastor at Wigginton, Tring
Amanda Pick to Haddenham (July 2016)
Derek Punchard has retired to Northampton
Robert Shehane, American interim minister to Ringstead
David Warrington will be inducted to the Abbey Centre Northampton on April 16th
Mark Welch to Burton Latimer
Philip Winn to Milton Keynes Hospital
Kathy Williamson to retirement in Borehamwood

EMPLOYMENT ALLOWANCE. Are you eligible for Employment Allowance? Do you pay less that £2.000 per annum in National Insurance contributions? If so, check out whether the scheme could save your church money. See https://www.gov.uk/employment-allowance
FOOTBALL TRACTS: Are you looking for a football tract with a difference?
Jon Pyper from Kimble Free Church has produced a comic strip tract with a football theme. The professionally-produced, colourful four-page tract tells the gospel story in a unique way. Jon enlisted the artistic talents of Bob Bond (known for his work with CPO) and together they have produced a tract that will appeal to many. Jon knows it won’t be everyone’s ‘cup of tea’ but feels the tract will generate discussion and that is the first step for many people in their journey to discovering God.
The tract is full of puns, deliberately retro and somewhat ‘cheesy’ but Jon makes no apology for that approach. “I want to get people smiling and asking questions and if I achieve that the tract will have worked” he said. To cover printing costs, they are available for 20p each or 16p each for 30 or more. Please email admin@kimble-free.co.uk if you would like further details.

NATIONAL CHURCHES TRUST’S 2016 COMMUNITY AND REPAIR PROGRAMMES: The National Churches Trust's 2016 community and repair grants programmes are now open. It can help with funding for a church repair project or installing a lavatory or kitchen, or improve community facilities in your place of worship. This year, there is also a chance to obtain additional funding to set up a social action project, in partnership with the Cinnamon Network, to meet the needs of local people.
Repair Grants
The NCT's Repair Grants programme offers funds of £10,000 and above towards the cost of urgent and essential structural repair projects. A small number of grants are available at £40,000 and above. Projects must have an estimated cost of at least £100,000 (including VAT and fees) to qualify.
Community Grants
The NCT's Community Grants programme offers the opportunity to apply for grants of £10,000 and above for projects which introduce facilities to enable increased community use of places of worship. All types of community projects will be considered, but should include lavatories or catering facilities. To qualify, projects must have an estimated cost of at least £25,000 (including VAT and fees).
How to apply
Churches, chapels and meeting-houses in England, Wales, Scotland and Northern Ireland open for worship and which are part of a denomination belonging to Churches Together in Britain and Ireland are eligible to apply. Applications from both listed and unlisted places of worship are welcomed. For 2016 the NCT is interested in seeing applications from churches in its priority areas, which include the North East of England, Northern Ireland, Scotland and Wales as well as some denominations. The first deadline for applications is 31st March. The final deadline for applications is 12 September 2016. Further information and how to apply online for a grant here.